“The mission of COMINAD is to mobilize Christian descendants of Africa to reach the world, especially the unreached with the Gospel of Jesus Christ.”

For more information, please contact the National Coordinator, Brian Johnson.  Donations can also be sent to the address below. 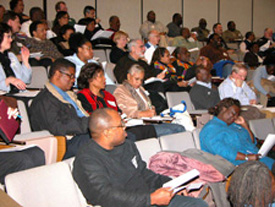 The warmth of fellowship flowed in every direction, from the registration desk to the cafeteria to the workshops and throughout the plenary sessions. The registration line became a receiving line. Clusters of friends popped up in lobbies and the dining hall, at workshops and on the sidewalks.

The centerpiece of this seminar was the African American Missions Manifesto. For almost twelve weeks a drafting committee proposed, edited, debated, and then proffered fresh topics. Chief architect was Minister Vaughn Walston, together with Rev. Gary Ham, Rev. Glenn Mason, and Dr. Jim Sutherland. Bill Porter, of Columbia International University, ably facilitated the discussions. The committee honed the document during the 24-hour gathering and after many deliberations presented the Missions Manifesto at the final plenary session. The Manifesto was approved by acclamation and then signed by all who so wished—seemingly everyone. Two delegates leaped for the signup sheet for “first signature” notoriety.

During the first two plenary sessions Rev. Gary Ham and Rev. Glenn Mason passionately presented the need for missions. Rev. Ham shared with us that "It will take wisdom and discernment on the part of leadership to rightly call out and equip the greatest generation of  missionary service," our newest missionaries. Rev. Mason challenged us to “Think like God,” when it comes to missions involvement and to understand God’s purpose of the African American people group. Ten different breakout sessions spoke to a range of missions concerns.  Some of these were “Strongholds and the Lack of Involvement Among African Americans in Missions,” by Rev. David Cornelius (International Mission Board of the Southern Baptist Church); “How the Bible Emphasizes Missions,” by Dr. Joseph Jeter (Have Christ Will Travel Ministries) and “An Overview of the Final Frontiers of Missions,” by Rev. Melvin Jackson (Searchlight Global Ministries). The RMNi Director taught on “Best Practices for Recruiting African American Missionaries” to about 60 persons.

One bright outcome of the Seminar is that the Manifesto may become a rallying point for engaging African Americans in global missions. We anticipate a dedicated website to post the document, with the capability to digitally endorse it. Visitors will also be able to request missions updates.  We hope to include suggestions for implementing the Manifesto.

If you weren’t able to attend, CIU intends to host a followup seminar in early 2008. Drs. Joe and Peggy Rayman of Africa on Fire stirred the embers to bring this consultation together. We hope to see you in 2008, so that the many brushfires representing the work of missions large and small will join into a fire-front to spread word of Christ globally from the African American community.

God seems to be lighting brushfires across the African American church landscape. Courageous African Americans are fanning the flames.  Churches need to let go of a "come" mentality, and equip members to serve outside their walls, where it isn't so safe--but where the harvest is.

Byron Johnson's website Vision 9:38 is dedicated to helping specific African American missionaries get to the field. Perhaps you might assist.

Some African American churches that have caught the missions vision are listed here.

COMINAD is an important network for African American missions mobilizers. As of 3/7/2011, Director Brian Johnson's contact information is: 608 Warwick Drive, McDonough, GA 30253, (313) 671-4994. Call Brian for information about upcoming missions conferences around the USA.

By God's grace, Christian cross-cultural missions is a high priority in some African American churches.  Here is a preliminary list of some of them.  At the bottom there is a map to help you locate one near you.  You may help add to this list by going here...

We're asking the Lord of the Harvest to send out 5,000 African American missionaries into today's global harvest fields. Here are one or more current candidates that are worthy of your consideration. Please contact them directly for more information about their ministries. They are willing to visit churches as time allows.

Vision 9:38 is headed by Byron Johnson and is dedicated to helping African American missionaries find financial support. We encourage missionary candidates to contact him.

If you are an African American missionary raising support to go to a mission field for at least two years, please contact us to post a link to your information.