Why don't we see many?

Who will take the Challenge?

Go for the GOAL!

In the blog entry from Greater Peace, we see just one example of the tremendous impact a mission conference can have on the church. Not only for their church, but folks from other churches attended as well and were challenged by what they heard!

Is your church ready to accept the Mission Conference Challenge?!

OUR GOAL is to see at least 10 churches hold their first missions conference before the end of the year.

Contact us with the name, city, and state of your church if ...

Was Jesus packing?  I only asked because inquiring minds want to know.  Was He strapped?  Was the Lord carrying a concealed weapon?  Was the  Christ armed?  I know these may seem like heresy and to say the least undignified questions.  However, the matter came up as I was reading a passage of the Bible that referred to the advice the Lord gave to His
disciples, just shortly before His arrest. Here it is as recorded in Luke's gospel.

Lu 22:36 Then said he unto them, But now, he that hath a purse, let him take it, and likewise his scrip: and he that hath no sword, let him sell his garment, and buy one.
Lu 22:37 For I say unto you, that this that is written must yet be accomplished in me, And he was reckoned among the transgressors: for the things concerning me have an end.
Lu 22:38 And they said, Lord, behold, here are two swords. And he said unto them, It is enough.

Now I have not had the privilege of Biblical study in a seminary.  I have yet to hear a sermon preached on this.  I have read a few commentaries on this passage.  To say the least, I am as confused as ever.

In the early 1980's I sat on the forth row of my college church. Little did I know that a young lady would speak that day and share words that would change the course of my life forever.

It must have been destiny that our paths would cross at that moment, for I’ve never seen her again. Yet her message haunts me even to this day. 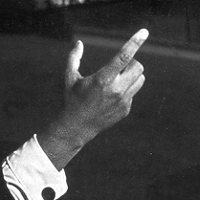 “You should be ashamed to die until you’ve made some contribution to mankind.” So spoke the late Dr. Martin Luther King Jr. as he quoted his predecessor pastor, Rev. Vernon Johns, of the Dexter Avenue Baptist Church in Montgomery, Alabama. In the 21st century, taking the gospel of Christ to all the world is the greatest contribution to mankind that the African American Christian community can make. If we don’t make this a priority, we should surely be ashamed to die.